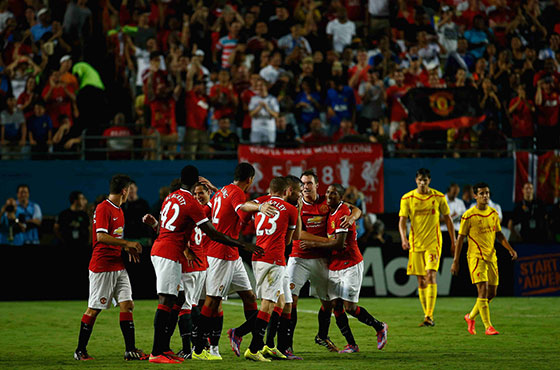 Super Sunday in the Barclays Premier League offered a mouthwatering fixture: Manchester United vs. Liverpool at Old Trafford. It is the one game that had football fans talking for weeks in the build-up to the match. Last season, Liverpool were successful against the Red Devils, but as most expected, tables were turned this season.

The match ended 3-0 with a crucial win for United as they are now firmly in third place and can technically challenge for the title. On the other hand, it was misery for the Anfield Reds who went home after a humiliating defeat. Goals came from Wayne Rooney, Juan Mata and Robin Van Persie in a sound attacking display by Louis Van Gaal’s men. At the same time, United goalkeeper David De Gea earned the ‘Man of the Match’ award for his brilliant saves. The likes of Raheem Sterling and second half substitute Mario Balotelli kept wondering how they could get one past the Spaniard.

Liverpool boss Brendan Rodgers would be questioned for his tactics and line-up which saw Raheem Sterling partner with skipper Steven Gerrard up front and first-choice shotstopper Simon Mignolet replaced by his backup Brad Jones. Jones was awful in defense and Liverpool fans would have liked Mignolet to retain his starting place. According to Sky Sports, the Belgian goalkeeper has been sidelined indefinitely because Rodgers wants to give him “time to reflect”.

The 13-time Premier League champions are now ten points ahead of their arch rivals. Van Gaal was able to keep his critics quiet who had questioned him in the start of the season. Under his guidance, United have won six games including the one against Liverpool. The Dutchman was quoted by The Mirror saying, “Of course. We have won six matches in a row now and that’s fantastic. But we have to improve our playing style still – and I say that nearly every week. We have to improve, but we’re very pleased because we know what it is to win against Liverpool. Everybody is happy. My cook is happy, my wife is happy and I’m happy!”

Currently the title battle is being fought closely between Chelsea and Manchester City, but with United in a good run of form, anything can happen. Most United fans would be happy with securing a top-four spot as it will allow them to get back into the UEFA Champions League next season. The glory hunters are back in contention at the moment, and they are showing no signs of stopping now.