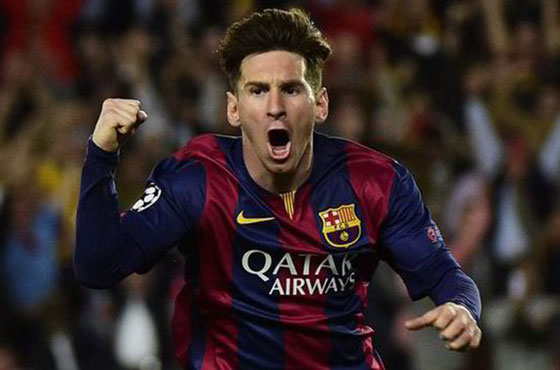 It has been almost a year since Argentina lost to Germany in the FIFA World Cup final in Brazil. Captain Lionel Messi would never forget the day he got so close to lifting the coveted trophy but his dreams were shattered by the determined Germans. The German squad mostly consisted of players from Bayern Munich. Die Bayern took on Messi’s Barcelona last night at the Camp Nou in the UEFA Champions League Semi-final first leg. What happened in those 90 minutes was simply magical!

Barcelona were determined to beat Bayern Munich at home and it showed in the way they played. While most of the 90 minutes offered close chances from both sides, it was the final 20 minutes that defined the match. Lionel Messi proved he is the world’s best player by breaking the deadlock by striking one past Bayern goalkeeper Manuel Neuer in the 77th minute. Neuer is arguably the world’s best shotstopper and he could not believe his eyes as the Argentine sensation scored one for the Catalans. Messi was filled with delight and the four-time Ballon d’Or winner celebrated the goal with his team-mates.

Messi returned three minutes later to score his second of the game by chipping the ball over Neuer. Once again the Bayern goalkeeper was left shellshocked. If that was not enough, the 27-year-old created a goal for Brazilian prodigy Neymar Jr. in the 90th minute. It was perfectly set up for Neymar who only had Neuer to beat and he did it in style. The match ended on 3-0 to Barcelona and Bayern will have to work very hard in the second leg at the Allianz to have any chance of qualifying for the final.

What made the match more interesting was the fact that Bayern manager Pep Guardiola’s was up against the club he previously coached. Not only that, he was one of the key figures involved in building Messi as the world’s best player. He was the Barcelona forward’s guide, mentor and coach. Guardiola was simply outclassed by his own protege.

It has been said by some fans that Pep Guardiola was handed a ready-made club in the form of Bayern Munich who had then been recently crowned Champions League winners. There is no doubt that Guardiola possesses a fantastic squad but he just does not have any player of the caliber of Messi and this was proven last night!