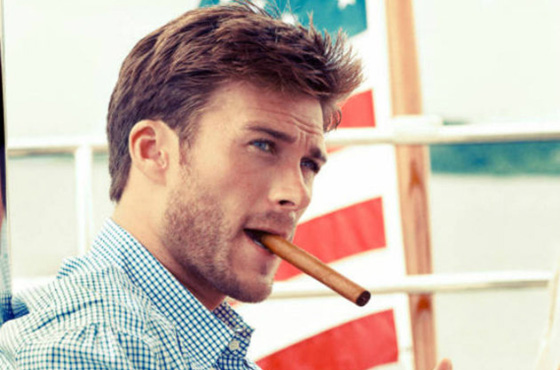 Is this the best-looking man in Hollywood?

When your father happens to be the macho-ist of movie stars, not to mention a living legend, it isn’t always easy getting out from under his shadow. But for Clint Eastwood’s 27-year-old son Scott, that may not be such a bad thing.

Currently filming alongside Brad Pitt for the upcoming World War II drama ‘Fury’, Scott seems to have inherited more than just his father’s chiseled features. With a ‘no bulls**t’ attitude just like Dad, it was a recent photoshoot for US magazine Town & Country that really brought him under the spotlight. Within days of the magazine hitting stands, the pictures went viral and social media sites were set alight with many new fans crowning him ‘the best looking man in Hollywood’.

Scott’s mother, Jacelyn Allen Reeves, had an affair with Clint Eastwood when the actor was involved with actress Sondra Locke, and they had two children together. Eastwood Sr. was never one for monogamy and was once famously quoted as saying, “they say marriages are made in Heaven. But so is thunder and lightning.”

Though still pretty new to the acting game, Eastwood Jr. seems to be using his time wisely. In addition to a number of cameo appearances in some of his father’s films, the budding talent will appear in ‘Mercury Plains’, ‘Dawn Patrol’ and ‘Boulevard H’, all expected to release sometime later this year.

There’s no guarantee Scott will be able to stand out from under his father’s shadow, after all, Clint Eastwood casts a pretty big one. But to quote Dirty Harry himself “If you want a guarantee, buy a toaster”.