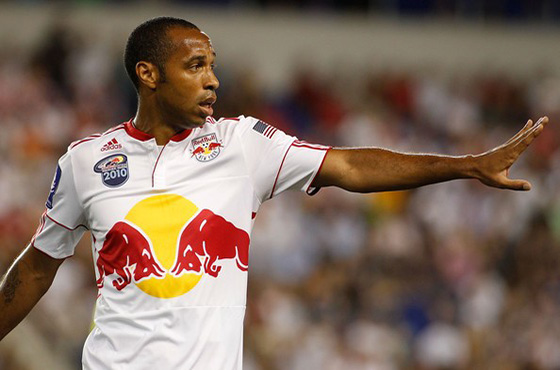 Thierry Henry has done it all. From winning The World Cup to The Premier League, and the Spanish La Liga as well, the former Arsenal striker might just be ending his career very soon… It’ll be the end of an era – as one of football’s greatest bids farewell. According to The Mirror, the New York Red Bull star might have played his last match, as his club was knocked out of the MLS in the play-offs last weekend.

The 37-year old reportedly is not interested in hanging up his boots entirely, which means he might be open to take on coaching role – considering his vast experience which would be beneficial to any top tier club. With that being said, he may find a new home in French club Bordeaux and reunite with former French international Willy Sagnol, who was quoted saying, “If he wants to come offer a hand with the attackers, he is very welcome. With his goals and his behaviour, he was a pro from beginning to end”.

The ex-Arsenal ‘Invincible’ may even consider reuniting with former boss and mentor Arsene Wenger, whom he has deep respect for. Henry returned to Arsenal for a short loan stint in January 2012, during off-season from New York Red Bulls. The fans welcomed him back and he was an inspiration for the lads.

It was great to see the legend return to his original hunting ground, and it would be a treat if the former Gunner helped breed a new batch of ‘Invincibles’. Regardless of where he decides to move after his expected retirement, he will go down as one of the best who ever walked down the tunnel.