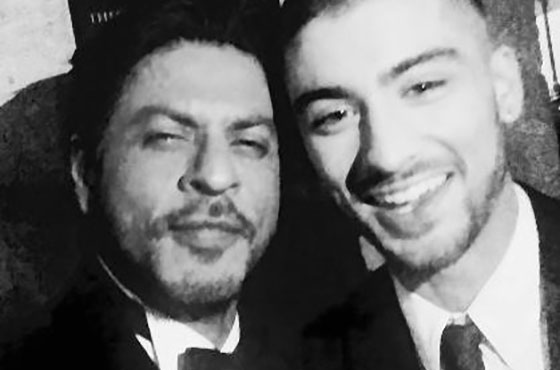 Shah Rukh Khan is so popular in India that even his selfies with other celebrities go viral. Case in point is former One Direction singer Zayn Malik. According to Pinkvilla, Khan and Malik got together for a selfie that was posted on Twitter by the ‘Chennai Express’ star. The selfie was captioned with Khan’s tweet: “This kid is so cool. May Allah bless him. Dinner time at the Asian Awards.”

What happened then? Around 96,000 retweets and 130,000 favorites. This selfie tweet probably broke Twitter. Both Khan and the former boy band man have a massive global following. The dynamic duo met at the awards and decided to treat their fans with a selfie. The interesting thing is that Khan never mentions Malik’s name and refers to him as ‘kid’.

Regardless, the selfie became an internet frenzy as Malik’s and Khan’s fans went crazy sharing it with the rest of Twitter.  So we wonder, who is cooler? King Khan or the former boy band star?

Khan has been in Bollywood for over two decades and has charmed some of the biggest actresses over the years in his blockbuster films including Kajol in ‘Dilwale Dulhaniya Le Jayenge’, Madhuri Dixit in ‘Dil to Pagal Hai’ and Preity Zinta in ‘Kal Ho Na Ho’.

In contrast, Malik along with his mates in One Direction have sold millions of records and made girls all over the world swoon. This is very close, but Khan gets the edge because of his ability to charm actresses who are around half his age, including Pakistan’s very own Mahira Khan in the upcoming film ‘Raees’.