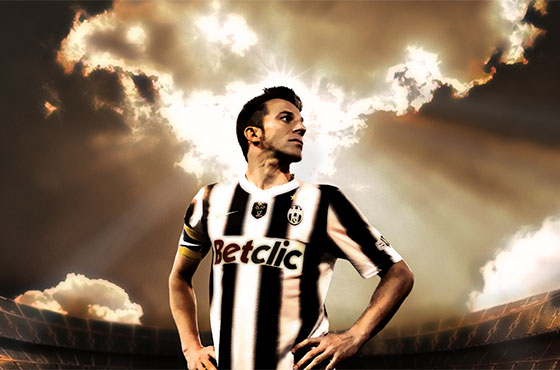 Alessandro Del Piero is one of Italy’s best exports of the beautiful game. At 40, he is still a star playing for Delhi Dynamos FC in the Hero Indian Soccer League. However, he will forever be remembered for his near 20-year career with Italian juggernauts Juventus, and winning the 2006 FIFA World Cup in Germany. Due to his exceptional career, he has garnered praise from football’s elite… Here’s what a few of them had to say:

“He is a world-class player who needs no introductions.”
Real Madrid Manager Carlo Ancelotti

“He is an exceptional person and really does not need to prove himself to anyone. Del Piero is a wonderful man and player.”
Former Italian International Mauro Camoranesi

“I believe in the champions and Alex is a champion. Del Piero is a player of very high quality and deserves his record. I feel embarrassed at putting him on the bench.”
Russia Manager Fabio Capello

“Del Piero is a champion with extraordinary technical ability and wonderful characteristics. When he is selected he never disappoints. He is an example to us all. He has great skills and intuitions that few other players have. He is a captain in the real sense of the word.”
2006 FIFA World Cup winning Italian Coach Marcello Lippi

“Here he is, he is different from Zidane, he likes to play, he feels it in his soul; between he and the French (Zinedine Zidane), I stay with him.”
Argentine legend Diego Maradona

“Del Piero is my idol. When I arrived at Juventus and I was introduced to Alex, it was like touching the heavens with my finger.”
Former Juventus teammate Ruben Olivera

“Del Piero is able to do on certain things, that could seem extraordinary, but he does them like they were simple.”
Former Italian International Fabrizio Ravanelli

“He (Del Piero) always comes to the training field with a smile for everyone, a comforting word for everyone. This is his greatness: humbleness … he’s a golden person.”
Former Juvenutus teammate Alessio Tacchinardi

“He is the greatest player I have ever played against, he twisted me incredibly.”
Manchester United legend Gary Neville

“He is a great player who has given everything to football, to Juventus and to Italy. To me, he plays a beautiful, clean type of football, and he is a man to admire.”
Barcelona Superstar Lionel Messi

“This time we have to worry about being efficient and keeping an eye on Del Piero. He can beat you in many ways.”
Real Madrid Goalkeeper Iker Cassilas

“Del Piero is a phenomenon. He has made history at Juventus over the past 19 years with loads of Victories. I do not like the use of superlatives, but we are talking about a truly extraordinary player, who still is very strong.”
Italian International Marek Hamsik