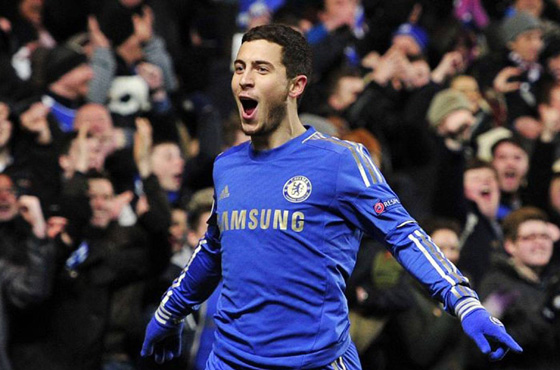 Jose Mourinho will need another inspired display from in-form Eden Hazard as Chelsea try to cement their position on top of the Premier League against Everton on Saturday.

Mourinho’s side have reached the summit despite just 11 league goals this season from their three main strikers, Fernando Torres, Demba Ba and Samuel Eto’o, but fortunately for the Blues their Belgium midfielder Eden Hazard has been in sublime form.

Hazard has netted 12 times in 26 league appearances, while also setting up countless chances for his team-mates, and boss Mourinho recently lauded the 23-year-old as Europe’s most talented young player.

Chelsea defender David Luiz has also been impressed by Hazard’s rise since moving to the Bridge from French club Lille in 2012 and the Brazilian is confident his team-mate can one day surpass Lionel Messi and Cristiano Ronaldo as the best in the world.

“He can be one day the best player in the world,” Luiz said. “I’m so happy for him, because he’s a great person, a great guy, with a lot of talent.”

A slip-up by Chelsea against Champions League hopefuls Everton would give second-placed Arsenal the chance to reclaim top spot.

The Gunners are one point behind their London rivals and will be desperate to bounce back from their midweek Champions League defeat when they host Sunderland.

Arsene Wenger’s side were left cursing their luck after losing 2-0 against Bayern Munich in a match where Mesut Ozil had a tame early penalty saved and goalkeeper Wojciech Szczesny was then sent off.

However, there is no time for Arsenal’s players to feel sorry for themselves and Germany defender Per Mertesacker has warned his team-mates they must “switch off” from the frustrating Bayern loss.

“We will concentrate on Saturday now, because we are going through a period with a lot of games,” Mertesacker said.

“We will switch off from the Champions League now, and then switch on again for the Premier League on Saturday.

“We need that because we have played a lot of games. Our team has great spirit and will come back from this. Now we must keep our chins up.”