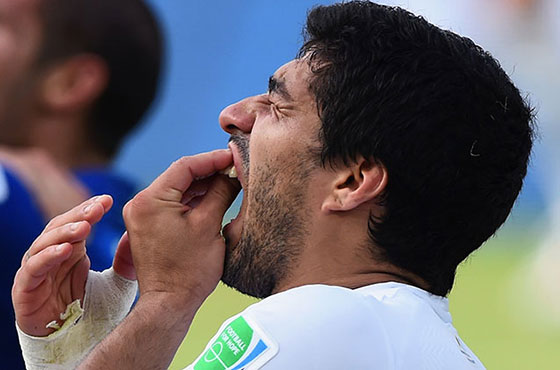 Football is known to be a beautiful game. It also has colorful characters especially in the European leagues. This year has been unbelievable. Germany wins the FIFA World Cup in Brazil and Lionel Messi takes Argentina to the final. Uruguayan sensation Luis Suarez biting Italian defender Giorgio Chiellini in a World Cup match was perhaps this year’s highlight. Real Madrid win their tenth UEFA Champions League and Manchester City get crowned the Barclays Premier League Champions for the second time. Liverpool narrowly miss out on silverware and who can ever forget Steven Gerrard’s slip against Chelsea. In one crazy football year, we heard some stunning quotes from players and managers alike. Here are the ten of the best from some of football’s greatest figures.

“Am I afraid of failure? He [Arsene Wenger] is a specialist in failure. I’m not. So if one supposes he’s right and I’m afraid of failure, it’s because I don’t fail many times. So maybe he’s right. I’m not used to failing. But the reality is he’s a specialist because, eight years without a piece of silverware, that’s failure.”
Chelsea manager Jose Mourinho

“I lost my balance, making my body unstable and falling on top of my opponent. At that moment I hit my face against the player leaving a small bruise on my cheek and a strong pain in my teeth.”
Uruguay striker Luis Suarez

“I can categorically tell you Mario Balotelli will not be at Liverpool.”
Liverpool boss Brendan Rodgers

“It’s probably been the worst three months of my life. I’ve seen it [the slip against Chelsea] a few times. I don’t have to watch something like that to go through the pain again and again and again.”
Liverpool skipper Steven Gerrard

“England is a very strong league, with three or four of the best teams in Europe, but, if I had played there, I would have destroyed it, like I have everywhere else. Arsenal could have happened, as everybody knows, but I would not do a trial. Who do you think regrets that more – Arsene Wenger or Zlatan?”
Paris Saint-Germain striker Zlatan Ibrahimovic

“I taught Romero how to stop penalties (at Alkmaar), so that hurts.”
Netherlands manager Louis van Gaal

“He’s not injured. He’s not fit. He’s not fit to play football unfortunately. He played in a reserve game the other day and I could have run about more than he did. I can’t protect people who don’t want to run and train, and are about three stone overweight.”
Queens Park Rangers manager Harry Redknapp