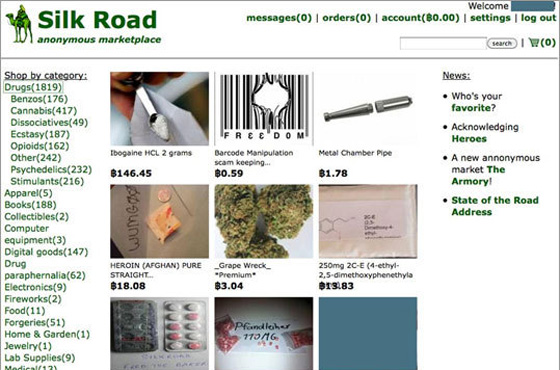 In a criminal complaint filed by the FBI, Agent Christopher Tarbell said “Silk Road has emerged as the most sophisticated and extensive criminal marketplace on the internet today.”

According to the latest reports Ulbricht, who worked under the alias Dread Pirate Roberts or DPR, used computers at internet cafes to access the site’s servers, which used several technological tools to hide their location as well as the identities of Silk Road clients.

The site, which has been operating since 2011, boasts nearly a million registered users who have bought and/or sold drugs using the digital currency bitcoins – a mode of currency that is virtually untraceable. Through the site users could buy drugs including cocaine and different strains of marijuana, and have them shipped anywhere in the world.

Charges filed against Ulbricht say Silk Road generated sales of more than 9.5 million bitcoins – which equates to roughly $1.2 billion. During the raid, law enforcement officials seized over $3.5 million worth of bitcoins by taking control of the ‘digital wallet’ used to run the site.

In a corresponding civil asset forfeiture action, federal prosecutors have claimed Ulbricht and Silk Road are liable to the government for the value of all transactions involving drug trafficking and computer hacking, as well as money laundering penalties.

A final amount is to be determined at the trial.