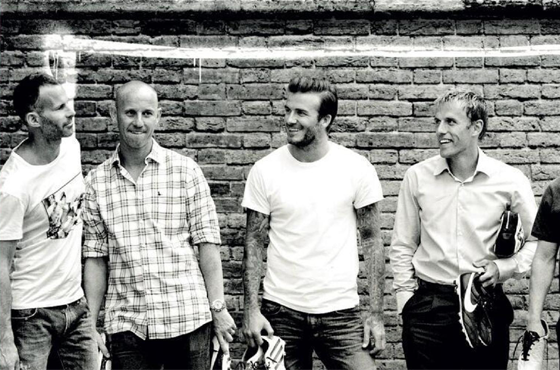 Class of 92 in bid for Manchester United takeover?

The Class of 1992 produced some of the biggest stars for Manchester United including David Beckham, Ryan Giggs, Paul Scholes, Nicky Butt and Gary Neville. Even at 40, veteran midfielder Ryan Giggs continues to play for the team. According to the latest reports, the class of 92 fronted by David Beckham are reportedly planning to launch a two billion pound bid to take over the club from American owners, the Glazer family.

The news comes at a time when Manchester United are playing their worst football in the last decade. Last season, they won the Barclays Premier League title with ease under former Manager Sir Alex Ferguson who retired shortly after the win. Fans have voiced opposition of current Manager David Moyes who has taken the brunt of the blame for the club’s short and unexpected downfall.

The air around Old Trafford is one of great discomfort. Growing discontent within fans and the recent under-par performance of the club has led to speculation the most popular football team in the world is very much up for sale. Beckham, who became a legend at the club during his ‘prime’, retired from football last season after a brief stint with French football giants Paris Saint Germain. But could he and the class of 92 be the answer to all of Manchester United’s problems?

In addition to being the most senior player on the team, Ryan Giggs is also tasked with certain coaching responsibilities alongside fellow classmate Paul Scholes. The general opinion seems to be that if anyone can understand the problems the club is currently facing, it’s the men who made Manchester United a force to reckoned with in the 90s.

According to Bloomberg, the club is currently valued at 1.6 billion pounds. Reports suggest that there have been takeover attempts before, but none proved successful. However, one thing seems certain, if the class of 92 meets the Glazers asking price, then it is expected fans will welcome the change in ownership with open arms.