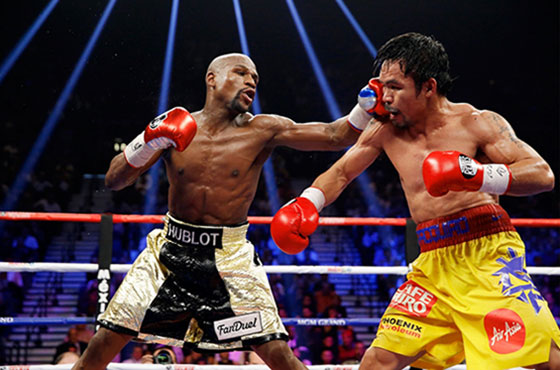 Can You Believe Mayweather Made 5M a Minute this Weekend?

Floyd ‘Money’ Mayweather not only won his hotly-anticipated bout against Manny Pacquiao on Saturday night, May 2nd, in Las Vegas; he also won a whole lot of megabucks over the weekend. According to Complex, the world boxing champion’s net worth is likely to increase to $330 million. In the 12-round bout, the Moneyman made $5 million every minute in the 36 minutes spent boxing against Pacquiao.

According to Wealth-X, Mayweather’s earnings from the match was nearly $180 million. It was also the “richest fight in boxing history.” On the other hand, his opponent Pacquiao earned about $120 million which values him at $300 million.

ABC reports that Mayweather is an undefeated five-weight world champion. His $180 million take-home pay  from the ‘fight of the century’ included earnings via merchandise, sponsorship, arena tickets, pay-per-view subscriptions and broadcast sales. He stands as the highest-paid athlete worldwide. One of his sponsors even includes watch giant Hublot whose branding he was sporting around his waist during the match.

The fight has been in the works for six years and we finally saw it happen on May 2 at the MGM Grand in Las Vegas. Mayweather’s next opponent could likely be British-Pakistani boxer Amir Khan. According to the Telegraph, Maywather’s manager spoke to the boxer known as King Khan and suggested him to “get it on” sometime this year. Will this happen in 2015 or take another five or six years? We will have to wait and see.