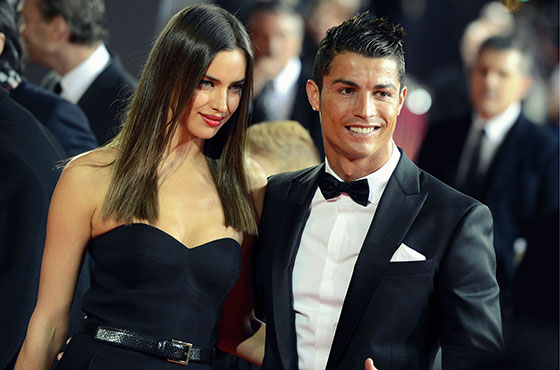 Guess what! Cristiano Ronaldo is reportedly single again. If rumors are to be believed, the three-time Ballon d’Or winner has split up with longtime girlfriend Irina Shayk. According to Metro, the 29-year-old bombshell has now unfollowed the Real Madrid forward on popular social microblogging site Twitter.

According to the Independent, Ronaldo and Shayk were together for three years.  However, the couple has neither confirmed or denied the news. The only thing we know is that the dynamic duo are no longer together on Twitter.

The speculation was further fueled by the Russian supermodel not showing up at the Ballon d’Or award ceremony where her hottie boyfriend was announced the winner. It was rather surprising that Ronaldo did not have Shayk by his side at one of his biggest nights of the year. According to Goal her spokesman was quoted saying, “[The Ballon d’Or] didn’t fit in with her schedule – it was because of work commitments. We have no further comment to make.”

Last year, Ronaldo had won the UEFA Champions League and the Copa Del Rey with Real Madrid. He is one of the top footballers in the world rivaled only by Barcelona’s Lionel Messi. The Portuguese sensation has already kicked off the year by winning the Ballon d’Or and his next big prize could be possibly  another sexy and glamorous supermodel.

Will Shayk be looking to hook up with another celebrity footballer? That remains to be seen…