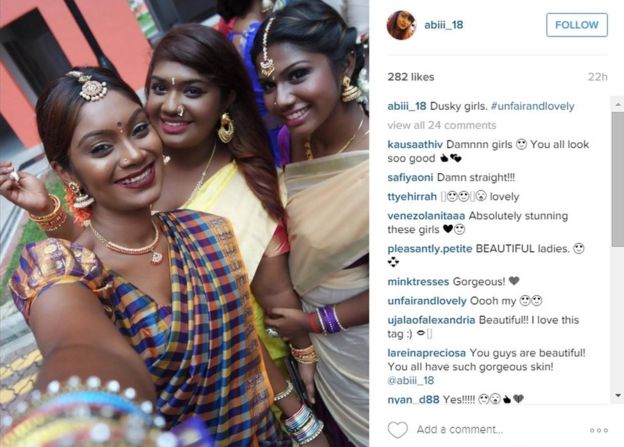 It may be difficult to unhinge but a new global campaign on social media is trying to challenge the widely-held notion, especially in South Asian countries, that beauty is synonymous with fair skin.

Millions of people, men and women, resort to trying all kinds of ways to bleach their skin to reach the idea of attractiveness that is ruthlessly promoted by cosmetic companies holding out promises that becoming fair will somehow improve their prospects in life, winning them better spouses, better jobs, and a better social circle. Needless to say, commoners as well as celebrities (the new ‘gori’ Kajol being case in point) have recklessly jumped onto this low self-esteem bandwagon.

Three students from the University of Texas, Austin launched this campaign. The inspiration came from Pax Jones, a 21-year-old black student who began a project aimed at combating color discrimination.

Jones created a photo series of stunning images of her classmates, two South Asian sisters Mirusha and Yanusha Yogarajah. Called ‘Unfair and Lovely’, it instantly became a hit and a campaign slogan was born.

The campaign asks dark-skinned people to upload their photos on social media, and has generated great response on Twitter and Facebook, with thousands of photos published via Instagram.

The objective is to create awareness that beauty has nothing to do with the color of your skin, and that its time ‘Fair and Lovely’ and ‘Menz Fairness Cream’ are relegated to the place they belong — the dustbin.