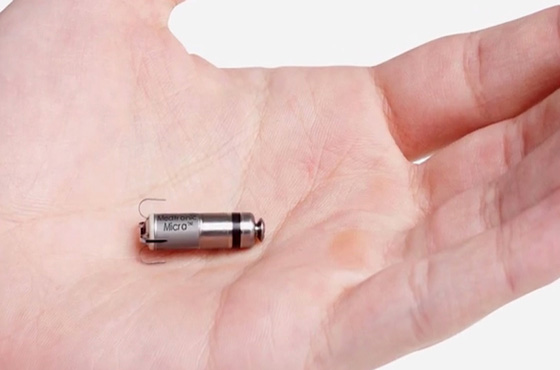 A surgical team in Canada has successfully implanted the world’s smallest pacemakers into eight patients. A pacemaker is a medical device whose primary purpose is to maintain an adequate heart rate – using small electrical currents delivered via electrodes to contract the heart’s muscles. Pacemakers are used to treat patients with heart rhythm disorders.

Calgary’s Foothills Medical Centre is one of three hospital in Canada — and one of 55 internationally — taking part in a global study to evaluate these devices, which are three centimetres long and roughly as thick as a pencil. The Medtronic Micra Transcatheter Pacing System is the world’s smallest pacemaker, at one tenth the size of a traditional device.

Traditional devices can be rather awkward for patients, as some of them have exterior wiring and battery packs. This tiny pacemaker works in the same fashion as larger variants, and delivers low-energy electrical impulses to the heart. According to The Canadian Press, doctors say the tiny tuner will reduce recovery time and lower the risk of infection. It is implanted non-surgically, which is less intrusive and has a faster healing period.

“The big advantage of the small pacemaker as compared to a normal pacemaker, is the small pacemaker is self-contained within the heart, meaning there’s no extra hardware up in the shoulder area, there’s no wires to the heart, there’s fewer components”, stated cardiologist Dr. Derek Exner, the surgeon who implanted the devices. “With anything that’s got multiple pieces, a piece can break down so instead of having a bunch of different pieces that are connected together, it’s all in a single unit”, he added. “So that gives the advantage of both battery longevity as well as reliability. The other advantage is that it eliminates the need to restrict the motion of the shoulder, which we typically do after surgery, and reduces the risk of infection”.

However, Dr. Exner also shared the new device’s shortcomings. Typical pacemakers are easily interchangeable, if need arises. Doctors can simply make an incision and attach a new device. “With the new one, it’s going to be somewhat harder to remove it,” he said. “You could if you needed to but we would probably just add another pacemaker inside the heart because they are so small”.

Doctors are familiar with the standard pacemaker, as it has been around for a long time, so there are no surprises involved. “Whenever things are new, things happen that you’re not expecting. We haven’t seen any of those problems but it’s always a possibility. The other is that we don’t know if it will in fact last the ten years that we expect, we hope it does and it’s estimated it will. And then lastly, it’s an issue of cost. The new technology is much more expensive than the existing technology” Exner concluded.

There are physical restrictions that come with the standard pacemaker, this new device will effectively eliminate them, removing the patient’s mobility limitations. Although the new technology comes at a cost – with an approximate price of $10,000, three-times more than standard pacemakers, it has the potential to give heart patients an extended lease on life and it’s joys!