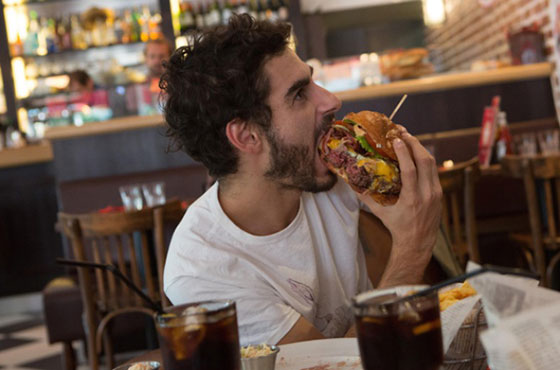 ‘Le Zlatan’ Burger is as Incredible as Zlatan

Zlatan Ibrahimovic is incredible both on and off the pitch. The Paris Saint-Germain striker has played for the world’s top clubs including FC Barcelona, Inter Milan, Ajax, Juventus and AC Milan. He has scored some phenomenal goals including the famous bicycle kick goal against England two years ago. That goal won him the FIFA Puskas Award. Besides his exceptional talent, goal-scoring abilities and swagger he also now has an ‘incredible’ burger to his name called the ‘Le Zlatan’.

According to The Guardian, this is the creation by a French restaurant called Doddy’s Café who wanted “an exceptional burger, which really stands out from the crowd, in the image of Zlatan Ibrahimovic.” When we mean exceptional, we are not joking. This bad-ass burger has 600 grams of mince beef loaded with onions, bacon and three types of cheese including cheddar, Emmental and Auvergne blue all sandwiched between giant burger buns. To completely devour it is an achievement in itself no different from that famous bicycle kick goal scored by Ibrahimovic.

According to Express, the ‘Le Zlatan’ costs £25. The restaurant manager Jean-Philippe Grandin is hoping that Ibrahimovic takes the opportunity to visit his outlet and take a bite of this gargantuan burger. Grandin hopes he is one of the few to have finished the burger completely. He was quoted by The Guardian saying, “Only seven people have managed to finish it so far.” A major ingredient of the burger is Auvergne blue cheese of which Grandin says is “a cheese with taste and character, just like Ibrahimovic.”

The $8000 Smartphone for Pocket Billionaires