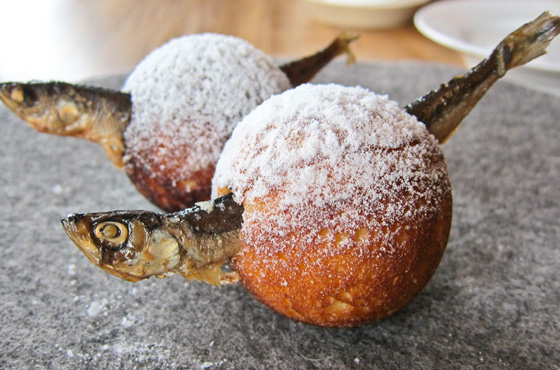 The restaurant’s head chef Rene Redzepi paid tribute to his staff, calling them his “inspiration”, as he collected the coveted prize.

“I know I’m not always the easiest person to be around,” he told guests at London’s Guildhall.

“I want to tell you in front of everyone, you guys are my dream team and inspiration. The patience and dedication that you give year in and year out is more than I could have ever hoped for.”

“We were the geeks, they gave us funny names. But that didn’t bother us, it fueled us and look where we are now several years later!”

Despite winning the award for the fourth time, the chef insisted there was more to come.

“We’re not at the finish line,” he said. “There are still so many discoveries out there, so many recipes to be written.”

There were murmurs in the audience when El Celler de Can Roca was named only at number two, losing the crown it seized from Noma for the first time last year.

The restaurant in Girona, run by three brothers and known for its dishes based on perfumes, had previously spent two years as runner-up.

The brothers spoke before the ceremony, revealing that last year’s victory had sparked a fresh wave of creativity.

Consolation for the culinary siblings came when Jordi was named Best Pastry Chef in the World.

Foraging restaurant Noma suffered last year after it was forced to apologize for a bout of food poisoning that left 63 customers suffering from vomiting and diarrhoea over a five-day period.

The restaurant, which gets its name from two Danish words “nordisk” (Nordic) and “mad” (food), serves up local fare such as moss, sea urchins and oysters, and is celebrated for its Hen and Eggs dish — quail eggs which are pickled and smoked.

Last month, Noma announced plans to relocate to Japan for two months in 2015.

Redzepi has formerly worked at The French Laundry, El Bulli and The Fat Duck.

The world’s top ten restaurants according to British magazine Restaurant: