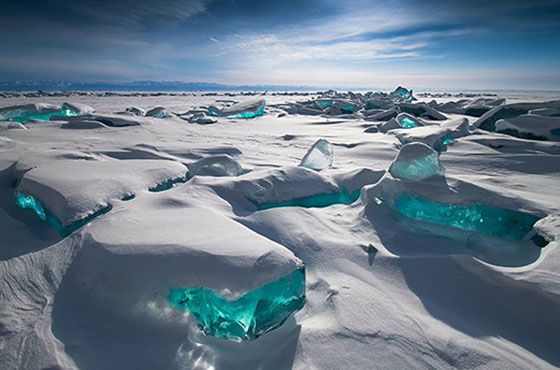 7 Places That Could Be Confused for Heaven on Earth

Who says heaven does not exist on our planet? From Asia to the Americas, our planet is full of beauty and splendor that the human mind can’t even imagine. All over the world, there are places that one can easily mistake for heaven on Earth just like the Emerald Ice in Baikal Lake, Russia above. Similarly, the following seven places, according to Bored Panda, are just a sampling of the most visually striking natural landforms in our stunning world. Prepare to be amazed by the following places as they are bound to leave you breathless.

Benagil Sea Cave in Algarve, Portugal
Portugal may be famous as the homeland of the fittest man on the planet Cristiano Ronakdo but it is also the home to this amazing cave in the region of Algarve. This is perfect for a romantic getaway and getting lost in nature.  According to LuxuryEscapes, “The Benagil Sea Cave is part of a system of caves that lines Portugal’s southern coast in the Algarve region” and is situated  “just around the corner from a beach in the tiny town of Benagil.” The Benagil Sea Cave is a must see on your next trip to Portugal.

Painted Dunes, Lassen Volcanic National Park,  USA
Forget Disneyland. This should be known as the happiest place on Earth. According to National Geographic, the “Painted Dunes can be seen atop Cinder Cone at Lassen Volcanic National Park in California. The colors are a result of volcanic activity. The beauty is breathtaking. The vision, as you can see, is like an oil painting. God’s tapestry on Earth.”

Ice Cave in Iceland
These Ice Caves in Iceland could easily be mistaken as the entrance to Heaven. These are scenic and make for some awesome photography. According to Extreme Iceland, these are “sometimes called Crystal Caves, the ice caves in Icelandic glaciers are a truly mesmerizing wonder of nature.”

Lake Natron Tanzania
According to Discovery Magazine, Lake Natron in Tanzania is named from ” the naturally occurring mix of chemicals it contains: mainly sodium carbonate decahydrate (soda ash) and sodium bicarbonate (baking soda). The lake consists of mineral hot springs along with a river. However, water does not stream out unless it evaporates. It is truly a sight to behold. LiveScience reports that this lake was considered to turn animals into stone which was turned out to be just a myth.

Champagne Pool New Zealand
Champagne Pool is located in the North Island of New Zealand. According to Amusing Planet,  it is a hot spring and the name comes from “the constant efflux of carbon dioxide gas, similar to a glass of bubbling champagne. Its dynamic colors “come from a rich deposition of minerals and silicate.”

Meteora, Greece
Looking for an escape from civilization and longing to enjoy peace and quiet? The Meteora in Greece is where you should head. This serene and peaceful region is famous for the monasteries on top of the rocks. According to the UNESCO World Heritage  Center, Meteora means ‘suspended in the sky’. It also states that, “the Meteora provide an outstanding example of the types of monastic construction which illustrate a significant stage in history.”