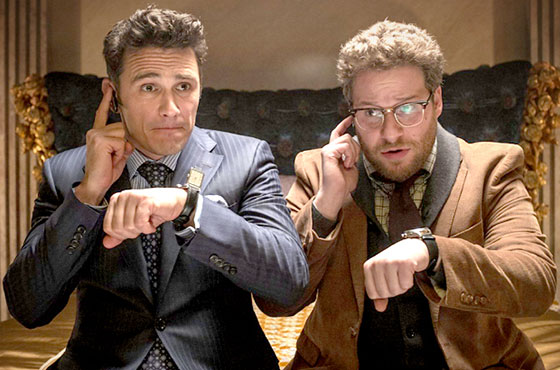 ‘The Interview’ Dead in the Water… Or is it?

‘The Interview’ is perhaps this year’s hottest satirical comedy about two journalists landing an interview with North Korean dictator Kim Jong-un. The CIA recruits them with the intention of turning the interview into an assassination. With funnyman Seth Rogen starring alongside James Franco, hilarity was bound to be expected. But recent reports confirm that Sony Pictures Entertainment has canceled the Christmas release of the hotly-anticipated buddy comedy. This came as a result of 9/11 scale threats to theaters from hacktivists ‘Guardians of Peace’, allegedly of North Korean origin.

In a statement to TheWrap the studio said, “Free expression should never be suppressed by threats and extortion. The decision not to move forward with the December 25 theatrical release of ‘The Interview’ was made as a result of the majority of the nation’s theater owners choosing not to screen the film. This was their decision.”

The studio further stated, “Sony Pictures Entertainment is and always has been strongly committed to the First Amendment. For more than three weeks, despite brutal intrusions into our company and our employees’ personal lives, we maintained our focus on one goal: getting the film ‘The Interview’ released. Free expression should never be suppressed by threats and extortion.”

If Sony Pictures wanted, they could have sought support from US President Barack Obama who has expressed his sympathy at the situation. In a press conference, The Wrap quoted the world’s most powerful man saying, “I think they made a mistake. We cannot have a society in which some dictator in some place can start imposing censorship here in the U.S. If somebody can intimidate folks out of releasing a satirical comedy, imagine what they’ll do when they see a documentary or political film they don’t like? That’s not what we are, that’s not what America’s about. I’m sympathetic that some private company was worried about liabilities. I wish they’d spoken to me first. Do not get into a pattern in which we’re intimidated by these kind of criminal attacks.”

Boies also responded to President Obama’s statement saying, “I think that what we have to do is use the President’s recognition of the importance of this issue as a rallying cry, so that all Americans can unite against what is really a threat to our national security. If state-sponsored criminal acts like this can be directed against Sony, it can be directed against anybody.”

After that decision, we immediately began actively surveying alternatives to enable us to release the movie on a different platform. It is still our hope that anyone who wants to see this movie will get the opportunity to do so.”

So, will ‘The Interview’ finally see the light of day? All we can do is hope…