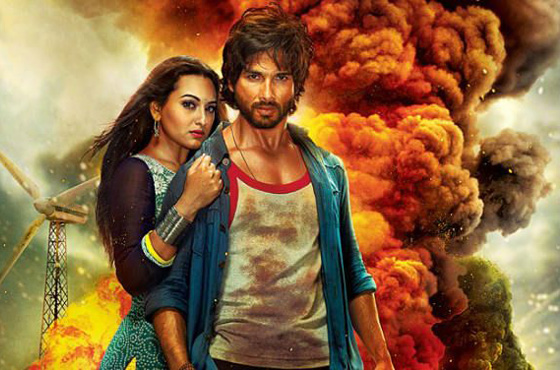 On Sunday the Bollywood actors showed off their dance moves and performed to the film’s soundtrack at a packed mall in Mumbai. Shahid Kapoor looked dapper in a chequered shirt and jeans while Sonakshi Sinha complimented his style donning a white embroidered shirt and loose-fit jeans.

‘R… Rajkumar’ is the story of a small-time goon caught up in the criminal life. Rajkumar’s ambitions go terribly-wrong when he catches a glimpse of Chanda played by Sonakshi Sinha, and all of a sudden everything goes out the window and he has a new aim in life – Woo Chanda!

At a recent press conference organized by Reliance Digital Shahid, Sonakshi and Prabhu Deva announced the launch of a comic-book series based on the film. The comic book will reportedly see Shahid as an action/romantic hero staying true to his on-screen character. Sonakshi’s character Chanda will also reportedly feature in the series with Sonakshi quoted as saying, “my brothers used to have a collection of comic books but I was never allowed near them. However, now I can proudly say I have my own comic book and I am in it.”

A heavy focus on merchandising seems to be the new trend in Bollywood. With many of this year’s releases including ‘Chennai Express’ and ‘Fukrey’ launching mobile gaming apps, blockbusters ‘Krrish 3’ and ‘Dhoom 3’ seem to be following suit with the release of children’s toys and accessories.

Though, whether or not this new strategy will have any effect at the Box Office remains to be seen.