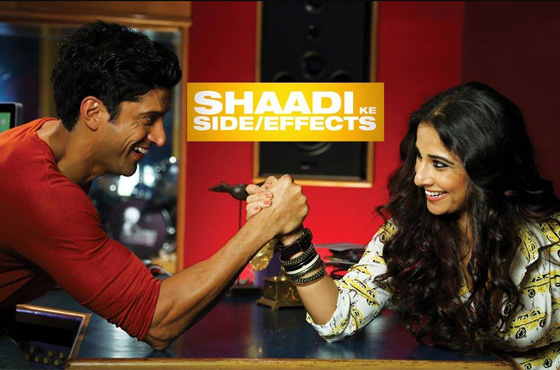 What do you expect when the two of the most versatile talents in Bollywood team-up together for a film? Great entertainment, that’s what! Especially if it’s a film that promises to tickle your funny bone from the word ‘go’.

A joint production between Pritish Nandy Communications and Balaji Motion Pictures, ‘Shaadi Ke Side Effects’ is a sequel to the 2006 smash-hit ‘Pyaar Ke Side Effects’, starring Rahul Bose and Mallika Sherawat.

But the sequel promises us a new ‘Jodi’ featuring the voluptuous Vidya Balan opposite our all-time favorite Farhan Akhtar. As the title suggests, ‘Shaadi Ke Side Effects’ looks at life after marriage for newlyweds Sid and Trisha. If rumors are to be believed actor /producer/director Farhan will also exercise his singing voice in the film. Though not much else is known, a source close to the production has revealed “it is a romantic song and he will record it this week itself”.

This wouldn’t be the first time filmmakers have employed such a tactic to promote their films. Aamir Khan famously lent his singing voice to the 1998 blockbuster hit ‘Ghulam’, with Prince of Bollywood Ranbir Kapoor following suit for his smash-hit ‘Barfi!’

However, that doesn’t appear to be the case with Farhan’s ‘Shaadi Ke Side Effects’. According to the source, “it is not a specially added song, but it will go with the flow of the story and it will be part of the film”.

Initially, the hotly-anticipated romantic comedy was supposed to release on Valentine’s Day 2014, but with that being a hot-time for films releasing on the big-screen, producers reportedly felt it would be better to push back the release date two-weeks to February 28th.