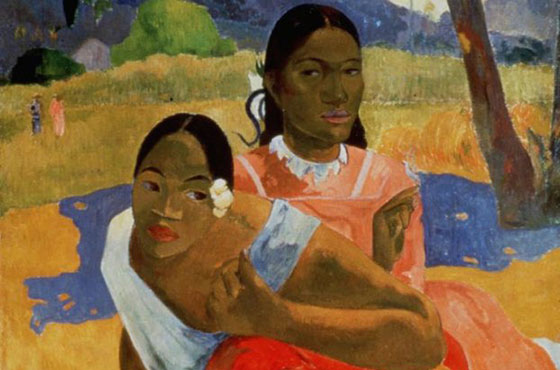 For those who did not know that Qatar has a vibrant art scene, you will be surprised. According to Arabian Business, Qatari buyers paid $300 million for a classic painting by French artist Paul Gauguin. The painting titled ‘Nafea Faa Ipoipo’ or ‘When Will You Marry?’ is from 1892 and depicts two Tahitian girls. Swiss Museum Kunstmuseum Basel had held the painting for nearly 50 years. According to People magazine, the previous owner was reportedly Rudolf Staechelin who managed the Staechelin Family Trust which is “a collection of at least 20 major Post-Impressionist works that Staechelin’s father amassed during World War I.”

According to The New York Times, the painting has allegedly been sold to a Qatari museum but no confirmation has yet been reported. People magazine reports that Qatar was also behind the purchase of the previous record paining purchase – a Paul Cezzane masterpiece titled ‘The Card Players’ for $259 million.

Chairperson of the Qatar Museums Authority Sheikha Al Mayassa bint Hamad Al Thani became the “biggest player in the international art scene” who has spent a billion dollars each year on such beautiful works of art. She reportedly once stated that this is representative of Qatar’s national identity. It could also give Muslim societies a positive outlook in the minds of western audiences.

Qatar has been investing huge amounts to finance Islamic and Modern Art museums. They have the big budgets to afford such masterpieces and at the same time also have a great eye for beauty.