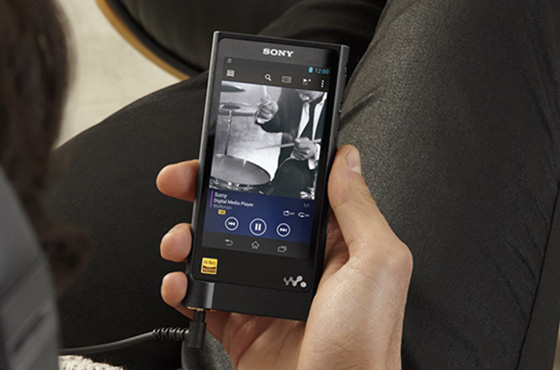 Sony unveiled a new product for music connoisseurs at the Consumer Electronics Show (CES) 2015. The successor to the Sony Walkman NW-ZX1 is designed specifically with high end audiophiles in mind. Sony states that it is “the fruit of continuous refinement in high audio quality technologies.”

The Sony Walkman NW-ZX2 features a luxurious design, with a body sculpted from solid aluminum. The playback buttons are etched into its curved side, located perfectly for even the laziest fingers. The device’s matte black casing adds to its already premium texture.

The device houses 128GB of storage, and Sony even throws in a microSD card slot in case the on board space isn’t enough! It comes with a battery that is large enough to provide up to 60 hours of playback from just a single charge. Other features include built-in Wi-Fi, Bluetooth and NFC which make it easily linkable to other accessories such as headphones or wireless speakers.

With this new-and-improved Walkman, Sony promises even better high resolution playback, boasting the support of unorthodox formats including AIFF, DSD, WAV, FLAC, and Apple Lossless. Full digital processing of audio signals to support playback of high-resolution sound is made possible by S-Master HX technology, and DSEE HX which is capable of up-scaling compressed sounds to high-resolution level.

As it is powered by Android 4.2 Jelly Bean, you can download apps from the Google Play store, and watch media from other sources as well. Sony has not yet confirmed when and where the Walkman NW-ZX2 will be available, but when it does arrive, its price will be $1200 – Remember, it’s meant for enthusiasts!