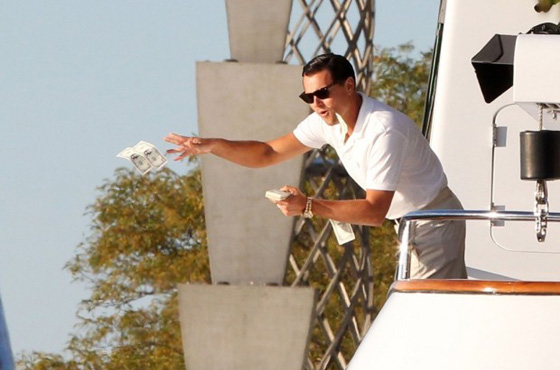 With the release of one of the most hotly-anticipated films of 2014 just weeks away, Hollywood superstar Leonardo DiCaprio provides a little insight into the totally “deplorable” lifestyle of stockbrokers depicted in his upcoming film ‘The Wolf of Wall Street’.

Speaking with the Daily News the actor said the film, “reflected everything that’s wrong with today’s society. This hedonistic lifestyle, this period in Wall Street’s history when Jordan gave in to every carnal indulgence.”

For his fifth collaboration with director Martin Scorsese (after ‘Gangs of New York’, ‘The Departed’, ‘Shutter Island’ and ‘The Aviator’) DiCaprio dons the role of Wall Street broker Jordan Belfort, the mastermind behind the stock market manipulation of the 90’s.

“We purposely didn’t show [Belfort’s] victims. We wanted the film to be a hypnotic ride the audience goes on, so they get lost in this world and not see the destruction left in the wake of this giant ship of greed.”

With DiCaprio’s performance already tipped for an Oscar nomination, the ‘Blood Diamond’ star went on to compare this “hedonistic lifestyle” to that of the Roman Empire saying, “We wanted to create the sense of a modern-day Roman Empire. We wanted the film to have this sense of everyone giving in to every temptation, minus the maidens putting grapes in our mouths.”

‘The Wolf of Wall Street’ is expected to release worldwide January 17, 2014.