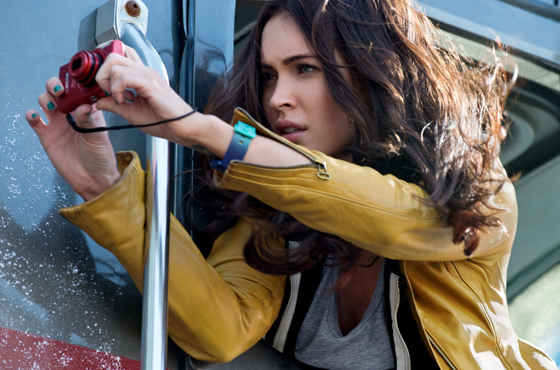 The ‘Teenage Mutant Ninja Turtles’ (TMNT) franchise was a phenomenon of the late 80s and most of the 90s. These four cool dudes came crashing down our lives in the form of action figures, comic books and a successful animated television show that ran for ten seasons. The franchise also produced three live action films in the 90s, two of which were successful. Later in the new millennium, the heroes in a half shell returned in a new animated series as well as an animated feature film sequel.

Director Michael Bay has been responsible for helming some of the biggest action films of the 90s such as ‘The Rock’ and ‘Bad Boys’ and the recent hit franchise ‘Transformers’. Realizing the potential of a big screen reboot of the ‘TMNT’ franchise based on his experience with ‘Transformers’, he worked with series creators Peter Laird and Kevin Eastman to bring back the four mutant teenagers to the big screen in his trademark style. Known for explosions and special effects, he seems the best person to bring back the nostalgia in the form of a high-octane, highly charged, special effects laden feature film.

Die-hard Transformers fans have criticized Bay for focusing more on special effects and action sequences as opposed to the source material. This is a similar concern for longtime TMNT fans that spent their entire childhood and teenage years growing up with the fabulous foursome. Bay reportedly tried to alter the storyline but reportedly returned to the source material after a backlash on social media by fans, former actors and stars associated with the previous films and animated series.

The recent trailer reveals the special effects and explosion laden style of Bay’s films, but also shows the new turtles looking familiar to fans without any drastic changes that may be considered otherwise blasphemous. There have been a few nods to the original animated series such as the yellow outfit worn by the Turtles’ human friend April O’Neal and arch nemesis Shredder’s costume design.

The four turtles Leonardo, Michelangelo, Raphael and Donatello are all-ready to return to a new generation of pizza loving fans. The new TMNT features stunning young actress Megan Fox playing the role of April O’Neal. She also featured in Bay’s ‘Transformers’ franchise as the love interest of protagonist Sam Witwicky, immortalized on the big-screen by versatile talent Shia LaBeouf. The film is directed by Jonathan Liebesman and expected to release August 2014.

It is certain that TMNT fans are all whetting their appetite for their favorite pizza eating turtles and cannot wait to shout ‘Cowabunga!’ the minute they see their turtle powered heroes grace the big screen.