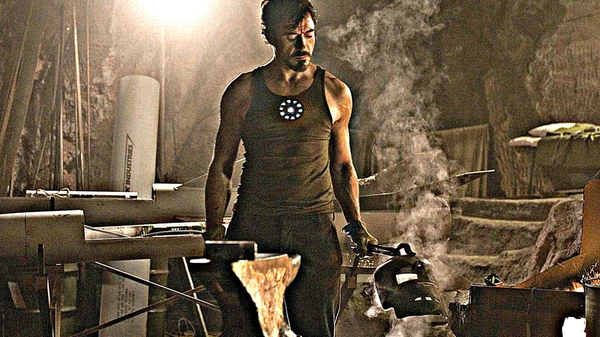 Now this is a great story… In early 2007, prior to the start of filming on the new ‘Iron Man’ franchise, director Jon Favreau rented out a complex in LA that once belonged to Hughes Aircraft, the American aerospace and defense contractor founded in 1932 by business tycoon, aviator and philanthropist Howard Hughes.

The facility boasted a series of interlocking hangars and was meant to serve as a production office for the film. It was also meant to supply Robert Downey Jr., who had just been signed by Marvel Studios to play Iron Man and his human counterpart Tony Stark, with inspiration for his character. Downey felt nostalgic looking at one of the larger hangars, which had fallen into a state of disrepair. Not too long ago, that building had played host to the big ideas of a big man who shook up industries and did things his own way.

This is where the story gets interesting… According to the Ashlee Vance biography Elon Musk: Tesla, SpaceX, and the Quest for a Fantastic Future, Downey had heard rumblings about a Hughes-like figure named Elon Musk who had constructed his own, modern-day industrial complex about ten miles away. Instead of visualizing how life might have been for Hughes, Downey could perhaps get a taste of the real thing. He set off in March 2007 for SpaceX’s headquarters in El Segundo and wound up receiving a personal tour from Musk. “My mind is not easily blown, but this place and this guy were amazing,” Downey said.

To Downey, the SpaceX facility looked like a giant, exotic hardware store. Enthusiastic employees were zipping about, fiddling with an assortment of machines. Young white-collar engineers interacted with blue-collar assembly line workers, and they all seemed to share a genuine excitement for what they were doing. “It felt like a radical start-up company,” Downey said. After the initial tour, Downey came away pleased that the sets being hammered out at the Hughes factory did have parallels to the SpaceX factory. “Things didn’t feel out of place,” he said.

Beyond the surroundings, Downey really wanted a peek inside Musk’s psyche. The men walked, sat in Musk’s office, and had lunch. Downey appreciated that Musk was not a foul-smelling, fidgety, coder whack job. What Downey picked up on instead were Musk’s “accessible eccentricities” and the feeling that he was an unpretentious sort who could work alongside the people in the factory. Both Musk and Stark were the type of men, according to Downey, who “had seized an idea to live by and something to dedicate themselves to” and were not going to waste a moment.

Excerpted from Elon Musk: Tesla, SpaceX, and the Quest for a Fantastic Future. Published by Ecco, a division of HarperCollins © 2015 by Ashley Vance.