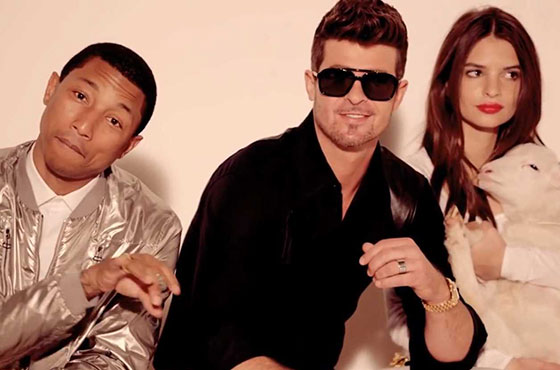 Pharrell Williams does not seem too happy these days especially after losing quite a chunk of the returns from his collaboration with Robin Thicke called ‘Blurred Lines’. According to Popcrush, the dynamic duo were taken to court for plagiarizing Marvin Gaye’s classic ‘Got to Give it Up’ because it sounds very similar to ‘Blurred Lines’.

Variety reports that the pair will have to pay $7.3 million in damages to Gaye’s family. Apparently, the single made over $16 million so close to half of it will be covering damages. Williams’ attorney Howard King was quoted by Associated Press saying, “No one can claim they own the style or the genre of Marvin Gaye. There are no virgin births in music. Let my clients go forth and continue to make their magic.”

Last October, the court ruled against Williams and Thicke because “the similarity of various hooks in both songs, bass lines, keyboard parts, vocal lines and elements of both songs’ melodic and harmonic composition.” Last month, Thicke defended himself by performing a piano medley in court trying to show that several songs could have the same chord structure. According to Consequence of Sound, some of the songs were by artists including legends such as U2, The Beatles, and Michael Jackson.

Apparently, ‘Blurred Lines’ was originally written by Williams according to claims made by Thicke. People quoted Thicke saying, “The biggest hit of my career was written by somebody else and I was jealous and wanted credit. I felt it was a little white lie that didn’t hurt his career but boosted mine.”

Rapper T.I also contributed to the song and he released a statement along with Williams and Thicke stating, “While we respect the judicial process, we are extremely disappointed in the ruling made today, which sets a horrible precedent for music and creativity going forward. Blurred Lines was created from the heart and minds of Pharrell, Robin and T.I. and not taken from anyone or anywhere else. We are reviewing the decision, considering our options and you will hear more from us soon about this matter.”