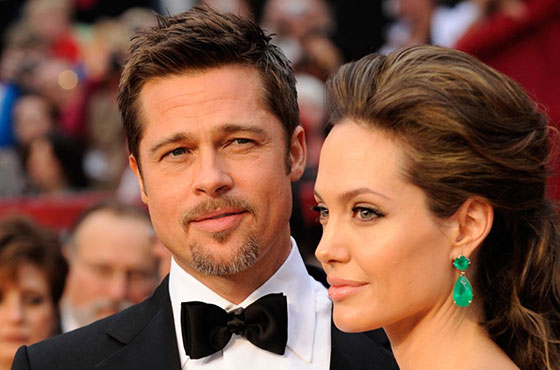 Angelina Jolie and Brad Pitt sizzled on-screen when they starred together in ‘Mr. and Mrs. Smith’. Now that Mrs. Pitt is a director after helming her first film ‘Unbroken’, her next project ‘By the Sea’ will have her starring alongside dearest-hubby Brad again.

When speaking with Radio Times the ‘Salt’ star said, “It feels a little daunting. We haven’t worked together for ten years. But all of the reasons why people say we should be scared of it, we feel that’s exactly why we have to do this – because we can. So we’re going to go boldly.”

Jolie is confident in her husband’s natural acting forte. The man who was once called the ‘Sexiest Man Alive’ by People Magazine is now one of Hollywood’s biggest actors. From ‘Interview with a Vampire’ to more recent ‘Fury’, he has always delivered the best on the big screen.

On her husband’s acting abilities the ‘Changeling’ actress said, “He’s a pretty strong actor! It’s going to be interesting. He’s a really great artist, such an interesting artist, and of course he’s the man I love, so I think we’re going to have a great time”.

Could her children follow in her and her husband’s footsteps? Angelina feels that their children should have a stable job while pursuing an acting career. “We’ve always said, if they want to act, we won’t let them only act, because it’s not enough. They’ll have to find a real job at the same time. But I’m hoping that when they see all the other things in the world, they’ll be inspired to be writers, politicians, activists. They’re very individual people. So I imagine they’re not going to follow their mom and dad”.

‘By the Sea’ is an upcoming film written and directed by Angelina Jolie. The Hollywood Reporter speculated it would be a relationship drama that Jolie wrote several years ago, that is centered on a couple with issues who take a vacation in a last-ditch effort to save their marriage. This will be the couples first collaboration together since Mr. and Mrs. Smith which was released in 2005, let’s hope they still have that on screen spark!