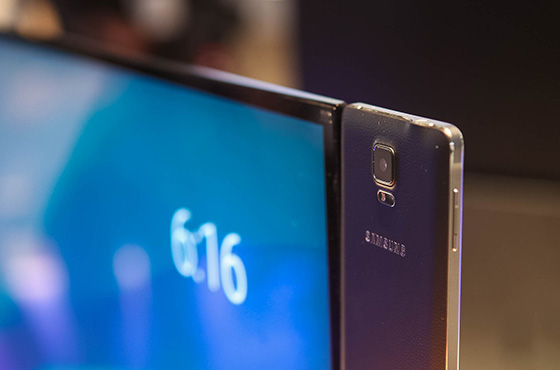 Sony’s New TV is Thinner than your Smartphone

The Consumer Electronics Show (CES) 2015 is a breeding ground for next generation technologies. Manufacturers take it as an exclusive opportunity to showcase their latest flagship devices to consumers, who eagerly await the unveiling of the year’s next big trend setters.

With the advent of 4K technology, ultra-high definition (UHD) televisions are slowly entering the mainstream. Sony rose to the occasion spectacularly, unveiling it’s own 4K monster: the Bravia X90C. With a thickness of just 4.9mm at its thinnest point, this television is way thinner than your average smartphone. Yeah no typo there, you read it just fine – 4.9 millimeters, or roughly just under half a centimeter thick… Go grab your kid’s ruler for good measure.

The X90C’s near bezel-free screen is uniquely heat bonded, meaning no screws are used. It also comes with an innovative wall-mount, which allows it to sit just 4cm from the wall. These nifty design perks make it a truly-sexy ‘flat’ panel display for your living room. Besides these features, it modesty boasts run-of-the-mill technologies that you would find in any other 4K smart TV. The TV’s ‘X1’ Processor, which not only displays excellent picture quality, but also up-scales regular standard definition content to near-4K quality.

But, besides its sleekness what sets this device apart from the rest?

The fact that it will be running the ‘Android’ operating system translates to a HUGE win for Google, over Apple. Although Sony is not the first company to incorporate the Android operating system into TV’s, the mere notion of this household brand adopting such technology may be a game changer for the smart television software market. The new range of Bravia televisions by Sony will be available from February 2015.