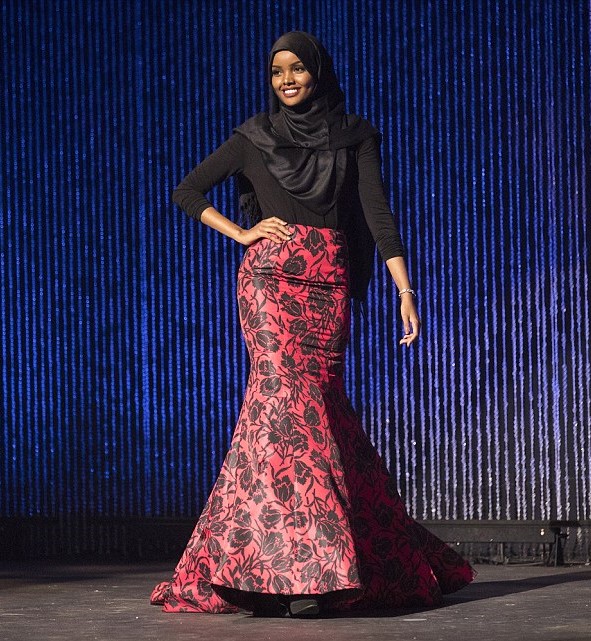 Where beauty pageants require body exposure and swimsuit walks, not everyone is comfortable showing off their body on an international television. So wasn’t Halima who made history by competing in beauty pageant in hijab and a burkini.

Halima Aden, a 19-year-old Somali-American girl, stood out with her hijab among all others competing in Miss Minnesota USA pageant that took place on November 26.

Being the first ever contestant to wear the religious garment throughout the pageant, Aden said that she wanted this to serve as an inspiration for Muslim and Somali girls.

“Not seeing women that look like you in media in general and especially in beauty competitions sends the message that you’re not beautiful or you have to change the way you look to be considered beautiful. And that’s not true,” Aden said while talking to The Huffington Post.

For the famed swimsuit round where girls are required to wear bikinis, Aden showed up in a burkini. She clarified how the pageant officials were compliant about her attire, saying that the swimsuit competition is judged on poise, grace and fitness.

Aden’s aim was to inspire women who are oppressed and bullied because of how they dress themselves. “I know so many women who stopped wearing the hijab because they were scared. When I heard about the platform, I wanted to inspire Muslim women to challenge themselves … (but) I didn’t want to compromise my values.

“Most images of Muslim woman are attached to victimhood … I never see positive representation, the way I see other women being celebrated. I wanted to challenge those definitions of beauty. It can be blonde hair and blue eyes, but it can also be something different,” Aden told TODAY.

Aden was among the 45 other girls competing for the title. Though Aden didn’t win, she did make it to the semifinal consisting of 15 others. However, she was positive to go on and plan to compete for the nationwide Miss USA title next year.

“A lot of people will look at you and will fail to see your beauty because you’re covered up and they’re not used to it. Be who you are. It’s easy to feel like you have to blend in but it takes courage to live your life with conviction and embrace the person you are,” Aden told KARE-11.