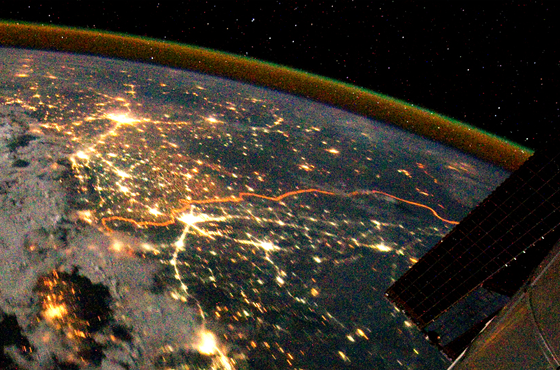 Whose bright idea was that? India-Pakistan border lit up like a Christmas tree

Marring the Earth’s surface is one of the planet’s most contentious borders. The Pakistan-India border was recently photographed by the crew of Expedition 28 from the International Space Station.

Blindingly luminescent, the border draws a bold orange line across the Earth’s surface in what is a captivating sight. A few years ago the Indian Government approved an idea to install floodlights along the border covering a length of 2000 km along the 2900 km Pakistan-India border to prevent terrorists from attempting any cross-border attacks on Indian soil.

So far the Indian Government has successfully lit 1861 km bordering Punjab, Rajasthan, Jammu and Gujarat, and it is expected the rest of the area aligning the border will also be completed soon.

The question remains… Whose bright idea was it to light the border so well; it can be seen from space?