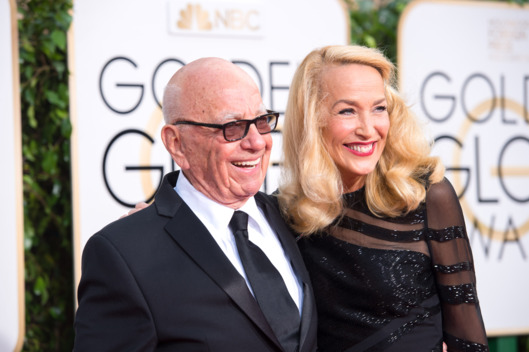 Rupert Murdoch, 84, one of the world’s most powerful men, married model Jerry Hall in a civil ceremony at Spencer House, London, yesterday.

59-year-old Ms. Hall is known also for her long-time relationship with Rolling Stones frontman Mick Jagger, with whom she has four children.

The Australian billionaire’s News UK company publishes The Sun and The Times newspapers. Murdoch is, according to Forbes magazine, the 77th richest man in the world; his family’s wealth has been estimated at $11.2 billion. Inheriting two Australian newspapers from his father at age 22, Murdoch went on to build one of the world’s foremost media empires. His family business News Corporation controls 120 newspapers in five countries. Book publishing firm Harper Collins is also owned by him. Fox channels in the US are under the ownership of the Murdoch family, which also has a large percentage of shares in the UK broadcaster Sky.

Murdoch’s marriage to Ms. Hall is his fourth, whereas it’s a first legal wedding ceremony for her. Her Bali wedding to Mick Jagger was later termed as legally invalid.

Texan-born Jerry Hall has been in the limelight for many years. She was the face of Revlon and Yves St Laurent and has appeared in many films, stage plays and television roles.

In a tribute to Fleet Street London, which is still considered the ‘spiritual home of the media’, the couple will be hosting a celebration at St. Brides church, located in the area, on Saturday.