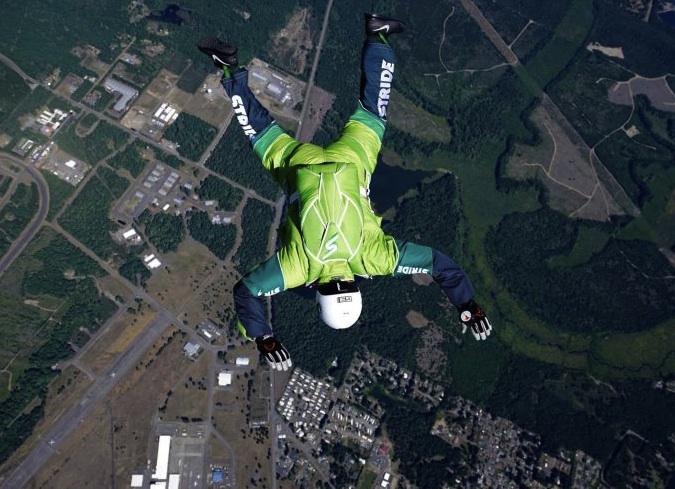 This one’s Neil Armstrong’s famous quote in reverse – a small step for mankind, a giant leap for a man – and the feat has already made its way into the Guinness Book of World Records.

For Luke Aikins, who took his first jump at age 12, it was the crowning glory of his skydiving career. The 42-year-old already has 18,000 jumps under his belt, but this 25,000 ft free-fall without a parachute or wingsuit was a historic one indeed.

Aikins runs a professional skydiving institute called Para Tactics, and has trained Navy Seals and other military personnel along with divers who are just in it for the thrill.

After taking the heroic plunge which lasted all of two nail-biting minutes for the crowd watching from below (including his wife), Aikins landed perfectly on target, dead centre of a 100 x 100 ft net, erected especially for the event at the Big Sky movie ranch at Simi Valley, California.

Immediately afterwards Aikins was up on his feet, waving to the cheering onlookers and raising his arms in jubilation. He thanked his crew, who had been preparing for the free-fall for nearly two years, making absolutely certain there would be no mishaps. Aikins was accompanied by three other skydivers when he made the leap, but he was the only one not wearing a parachute.

While everyone else was appreciative of the intrepid, record-breaking jump, his mother refused to watch, saying it would be too nerve-racking. Also, his four-year-old son was clearly not impressed, sleeping in his mothers arms while daddy was making history!

Check out the hair-raising video above.