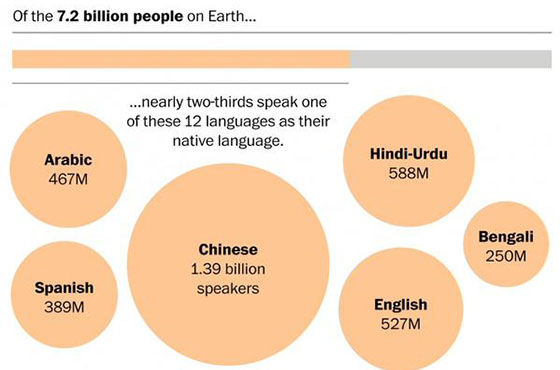 Urdu/Hindi the Second Most Spoken Language in the World

We live in a world today where English has become clearly a universal language for all communication. It is perhaps the most dominant language whether it is the workplace or on social media. Despite English’s universal appeal, it actually has less native speakers in the world compared to Chinese and Urdu/Hindi.

According to the Washington Post, Chinese, including all dialects, has a staggering 1.39 billion native speakers in the world with Urdu/Hindi coming in second place with 588 million. English comes in third with 527 million speakers.

Many people from India and Pakistan have migrated to different parts of the world. India is the second-largest country in the world with regards to population after China. According to BBC, it is also the world’s largest democracy. Hindi/Urdu has its origins in Northern India and is also the national language of Pakistan although the official ‘business’ language is English according to the country’s constitution.Urdu may be similar to Hindi but borrows a lot from Arabic and Persian among other languages as well. According to Dawn, “Urdu is a mixture of Persian, Arabic and Turkish words formed with the intermingling of invading Muslim armies and local Hindi-speaking Hindus.”

Pakistani’s should be proud of the Urdu language as it has a rich heritage, beautiful literature and poetry. The language has produced legends such as Mirza Ghalib, Faiz Ahmed Faiz and Mir Taqi Mir. Urdu plays became hugely popular in the 1980s thanks to the success of Hasina Moin’s penned drama serials ‘Ankahi’, ‘Tanhaiyaan’ and ‘Dhoop Kinare’. Recent years has seen the success of ‘Humsafar’ which became popular worldwide amongst Indian and Pakistani communities. Pakistani artists including the late Nusrat Fateh Ali Khan, Vital Signs  and Junoon have immortalized the language in rock, pop and classical music forever. Urdu-language films such as ‘Khuda Kay Liye’ and ‘Bol’, both by director extraordinaire Shoaib Mansoor, have gained global prominence in the last decade.

Urdu literature, poetry and classic television shows should be preserved so that future generations can learn the importance and beauty of the language.