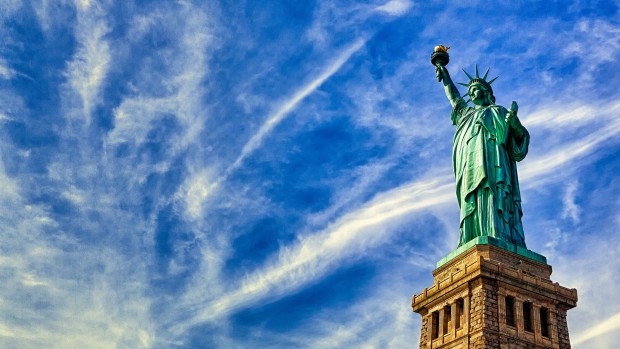 Historically, she was the woman of all immigrants’ dreams, for when they sailed into New York Harbour, she beckoned to them, her torch lighting up visions of a new, better life. This year, she celebrates her 130th birthday, and like all grand dames, Lady Liberty has quite a few secrets up her sleeve.

1. She’s modeled on two actual women. The French sculptor, Frederic Auguste Bartholdi, tried to please both his mother, who was the model for the statue’s face, as well as his wife, who posed for the torso and limbs (classic dilemma all men will understand).

3. She’s a feminist icon. Women were banned from the statue’s inauguration ceremony, but a group of gutsy suffragettes hired a boat and held their own party, taunting American men for raising a female statue depicting liberty in a country that denied basic freedoms, like voting, to its women.

4. She’s staked a claim on her territory. The island where she stands was originally called Bedloe’s Island, after a Dutch merchant. In 1956, Congress passed a bill renaming it Liberty Island.

5. She’s a plus-size model. The lady weighs an amazing 204 metric tons and has a 35-foot waistline. She’s still pretty flexible, though – when winds of upto 50 mph are blowing around her, she can sway upto three inches, and her torch-bearing arm moves upto six inches.

6. She has an equally well-known half-sister. The inner framework of Lady Liberty is based on the same design as the Eiffel Tower, both engineered by Gustave Eiffel.