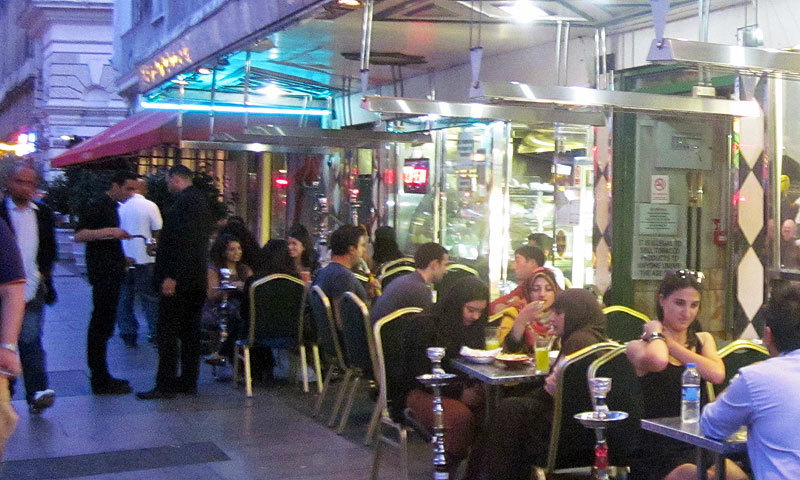 As you walk down the road, an aroma of kebab and sheesha wafts on the evening breeze. You look into the restaurants, debating whether it’ll be shawarma or mezze for dinner, and what’s the better choice,’ Maroush’ or ‘Balad’? You almost bump into a toddler with a dark mop of curls, careering on a scootie, followed by an agitated sibling shouting instructions in Arabic.

You see men, young and old, lounging in chairs on the pavement outside cafes, blowing away the day’s stresses in fragrant smoke as they discuss politics, or occasionally, keep time by clicking their fingers as one of the company breaks out into a nostalgic tune. You quicken your steps passing the greengrocer’s, where two matrons in abayas are loudly haggling over the price of okra or brinjal. A rich, sudden draught of oudh or bukhoor hits you; you look left; indeed it’s Oudh Al Haram’ — the shop-sign outside the parfumerie confirms the fragrant assault on your olfactory senses.

No, this is not the scene in a Levantine souk, as you would expect. You are in the heart of Central London — and this is Edgware Road. Sometimes derisively called ‘Downtown Dubai’, often jokingly referred to as the ‘Gaza Strip’ by Brits who not only tolerate it, but frequent it too.

London provides the best kind of climate for areas like this to thrive — a free-market economy co-existing with a liberal democracy inclusive of ethnic diversity.

Located in Westminster borough, Edgware Road sits in London’s cosmopolitan centre, rubbing shoulders with Marble Arch, Oxford Street and Hyde Park, and within a stone’s throw of Buckingham Palace. As you walk, Arabic and English (note the order) aren’t the only languages you hear. You’ll catch sounds of Urdu, Punjabi, Kurdish and Farsi, as working immigrants find employment all along this commercial-cum-residential strip that’s become a home away from home for them.

Quran recitations will greet the early visitors to the shops proudly proclaiming ‘halal’ goods and there’s even an Ashura procession on the 10th of Muharram. Residents as well as tourists find here a cultural ease that’s often denied to them at home. The area exudes round the clock energy; the street comes alive after sunset, with most cafes open long past midnight. As you leave in the late hours, you’ll carry the happy memory of a snatch of ululating Arabic song or a burst of spontaneous laughter carried on the wind. It’s enough to give you a good night’s sleep.