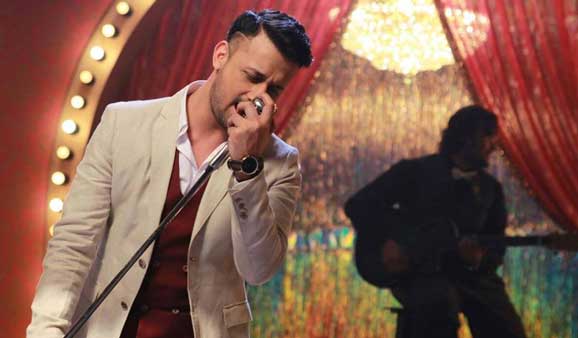 When Atif Aslam appears in a video, he does tend to steal the limelight – and that’s not all down to his powerful vocals – so it is with his latest release, a song for the upcoming Pakistani film ‘Actor-in-Law’. The video features the movie’s on-screen stars Mehwish Hayat and ‘Mah-e-Mir’ hero Fahad Mustafa in romantic sequences, but all everyone seems to be raving about is Atif.

Whether the film, which also features Pakistani and Indian veterans Javed Shaikh and Om Puri, will fare well at the box-office or not remains to be seen, but judging by the buzz on social media for the soundtrack the initial impression is certainly a positive one. Along with Atif’s ‘Dil Yeh Dancer Ho Gaya’ the film features songs by Junaid Younis of ‘Siege’, soul-singer Asrar Shah and Rahat Fateh Ali Khan.

At the launch of ‘Actor-in-Law’ Atif said he was excited about the song because the lyrics are not the typical ‘run-of -the -mill’ romantic, but quite ‘unique’, making a catchy combination with the musical score. That he enjoyed doing the video is quite obvious, and the vibes he sends out are getting fans to take the song to heart too, as it’s already a trending hit.

Check it out above.